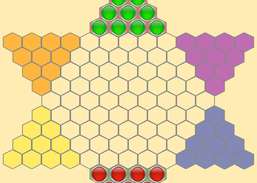 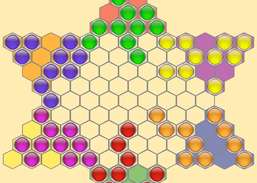 FromDimul_Borsh:Chinese Checkers is a strategy board game of German origin (named "Sternhalma") which can be played by two, three, four, or six people, playing individually or with partners. The game is a modern and simplified variation of the American game Halma. The objective is to be first to race all of one's pieces across the hexagram-shaped board into "home"--the corner of the star opposite one's starting corner--using single-step moves or moves that jump over other pieces. The remaining players continue the game to establish second-, third-, fourth-, fifth-, and last-place finishers. The rules are simple, so even young children can play

Play a board strategy game, like chess, checkers, Reversi, or Baduk.

A modern take on the classic board game.

Wellcome to king of Ludo game which has classic look and feel.

Ludo game is played between 2 to 4 players and you have the option of playing the game against the computer, against your friends, or even...

Ludo board game is fun and hilarious game to play with friends and family.